The Awfulness of Sin
by Jim Byrd 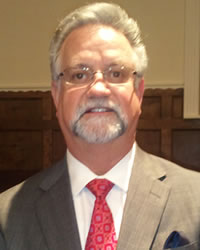 It is impossible for us to fully set forth the vileness and filthiness of sin.  How indescribably horrible and awful every sin is to our holy God.  Solomon said, “Fools make a mock at sin” (Proverbs 14:9).  Fools are unregenerated people, those who are graceless and Christless.  They speak lightly of and take pleasure in their sins.  Some suggest an expanded translation of the verse should read, “fools make a mock of sin and the offering for sin” thereby making light of the sacrifice and satisfaction of Christ’s substitutionary atonement.

Those who have been made wise unto salvation, however, neither mock sin or belittle its seriousness and they certainly do not ridicule the only offering which could take sin away, the sufferings and death of the Lamb of God.  We understand that sin is missing the mark of perfection and must be dealt with by God in a manner consistent with His holiness.  Judge the awfulness of sin by the greatness of the one and only sacrifice that could take it away - the substitutionary death of the Son of God.  “And ye know that He was manifested to take away our sins; and in Him is no sin” (1 John 3:5).

In the death of the Son of God we are made to realize that sin is not a trivial thing to God.  It is an affront to His holy character, an attack upon His throne; it is treason against Him and so He declares, “the soul that sinneth, it shall die” (Ezekiel 18:4).  We can best determine the foulness of sin by the extraordinary value of the sacrifice that washes it away.  “The blood of Jesus Christ His son cleanseth us from all sin” (1 John 1:7).  If the bloody death of the Son of God was necessary to remove sin, how unspeakably evil sin must be.  Think of Who took it away - “the only begotten of the Father” (John 1:14) - and of what had to be done to take it away.  The Son of God had to join Himself to our nature and become like unto those He came to save, “yet without sin” (Hebrews 4:15).  He must step down from His lofty throne to live among people who hated Him.  He must bear their insults, be falsely accused of blasphemy and sedition, publicly humiliated, mocked, beaten and crucified.  The iniquities of His people must be laid on Him (Isaiah 53:6) and He must endure the wrath of God in our stead.  He must be forsaken by the Father and suffer the infinite fury of the Father’s righteous judgment against sin.  The true awfulness of sin can only be determined by the worth of the only offering that could put it away, the sacrifice of our Lord Jesus.