Preface to the Epistle of James
by Martin Luther 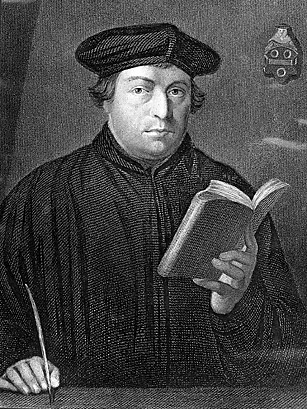 Though this epistle of St. James was rejected by the ancients, I praise it and consider it a good book, because it sets up no doctrines of men but vigorously promulgates the law of God. However, to state my own opinion about it, though without prejudice to anyone, I do not regard it as the writing of an apostle; and my reasons follow.

In the first place it is flatly against St. Paul and all the rest of Scripture in ascribing justification to works. It says that Abraham was justified by his works when he offered his son Isaac; though in Romans 4 St. Paul teaches to the contrary that Abraham was justified apart from works, by his faith alone, before he had offered his son, and proves it by Moses in Genesis 15. Now although this epistle might be helped and an interpretation devised for this justification by works, it cannot be defended in its application to works of Moses' statement in Genesis 15. For Moses is speaking here only of Abraham's faith, and not of his works, as St. Paul demonstrates in Romans 4. This fault, therefore, proves that this epistle is not the work of any apostle.

In the second place its purpose is to teach Christians, but in all this long teaching it does not once mention the Passion, the resurrection, or the Spirit of Christ. He names Christ several times; however he teaches nothing about him, but only speaks of general faith in God. Now it is the office of a true apostle to preach of the Passion and resurrection and office of Christ, and to lay the foundation for faith in him, as Christ himself says in John 15, "You shall bear witness to me."

All the genuine sacred books agree in this, that all of them preach and inculcate [treiben] Christ. And that is the true test by which to judge all books, when we see whether or not they inculcate Christ. For all the Scriptures show us Christ, Romans 3; and St. Paul will know nothing but Christ, I Corinthians 2. Whatever does not teach Christ is not apostolic, even though St. Peter or St. Paul does the teaching. Again, whatever preaches Christ would be apostolic, even if Judas, Annas, Pilate, and Herod were doing it.

But this James does nothing more than drive to the law and to its works. Besides, he throws things together so chaotically that it seems to me he must have been some good, pious man, who took a few sayings from the disciples of the apostles and thus tossed them off on paper. Or it may perhaps have been written by someone on the basis of his preaching. He calls the law a "law of liberty," though Paul calls it a law of slavery, of wrath, of death, and of sin.

Moreover he cites the sayings of St. Peter: "Love covers a multitude of sins," and again, "Humble yourselves under the hand of God;" also the saying of St. Paul in Galatians 5, "The Spirit lusteth against envy." And yet, in point of time, St. James was put to death by Herod in Jerusalem, before St. Peter. So it seems that this author came long after St. Peter and St. Paul.

In a word, he wanted to guard against those who relied on faith without works, but was unequal to the task in spirit, thought, and words. He mangles the Scriptures and thereby opposes Paul and all Scripture. He tries to accomplish by harping on the law what the apostles accomplish by stimulating people to love. Therefore, I will not have him in my Bible to be numbered among the true chief books, though I would not thereby prevent anyone from including or extolling him as he pleases, for there are otherwise many good sayings in him. One man is no man in worldly things; how, then, should this single man alone avail against Paul and all the rest of Scripture?

NOTE: The edition of 1530 put instead of these last two sentences, "Therefore, I cannot include him among the chief books, though I would not thereby prevent anyone from including or extolling him as he pleases, for there are otherwise many good sayings in him."