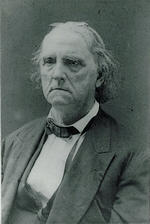 Arminian workmongers, who, being ignorant of God’s righteousness, and going about to establish their own righteousness, cannot see in the absence of Sinai’s thunder, any incentive to holiness; but those in whose hearts God has recorded the law of the spirit of life, cease not to pray that they may be found in Christ, not having their own righteousness, which is of the law. Their desire is that they may know him and the power of his resurrection, and the fellowship of his sufferings, and be made comformable to his death. As to our being released from loving our neighbor, or from anything enjoined in the law, we say, “We do not make void the law, but we establish it.” For love is the fulfilling of the law, and the love of Christ constrains us. His love is shed abroad in us, and that will invariably centre in that which is lovely in the divine estimation. But if the love of Christ be not in us, in vain shall we strive to fulfill the requisitions of the law, in love to God, or love to man.

That which is known to legalists only as duty and obligation, becomes the sweet privilege of the renewed soul, by the abounding of that grace which Changes the slave into a child, and duty into choice.